MythTV is a free open-source digital video recording system, easy to use with many features such as auto-scheduling recordings, and most importantly removing commercials. All you need is to install the mythtv backend program on a computer with a linux compatible TV tuner (a list of USB devices that work with the US ATSC standard is here but there are also PCI-based or Ethernet-based tuners). I am actually using a Mygica A680B USB HDTV Tuner I bought off ebay new for $25 which works fine on linux even though they don’t provide any linux drivers (it turns out it is very similar to other other devices which have linux support). I connected this tuner to my home antenna and plugged into an ancient Dell Latitude D600 labtop from circa 2002 (60 GB, Celeron M, 1.6 GHz, 512 MB) and did a minimal Arch Linux install with LXDE which turns out to be plenty fast enough to run the backened recording server as well as the frontend player (and can output S-Video to my CRT tv): 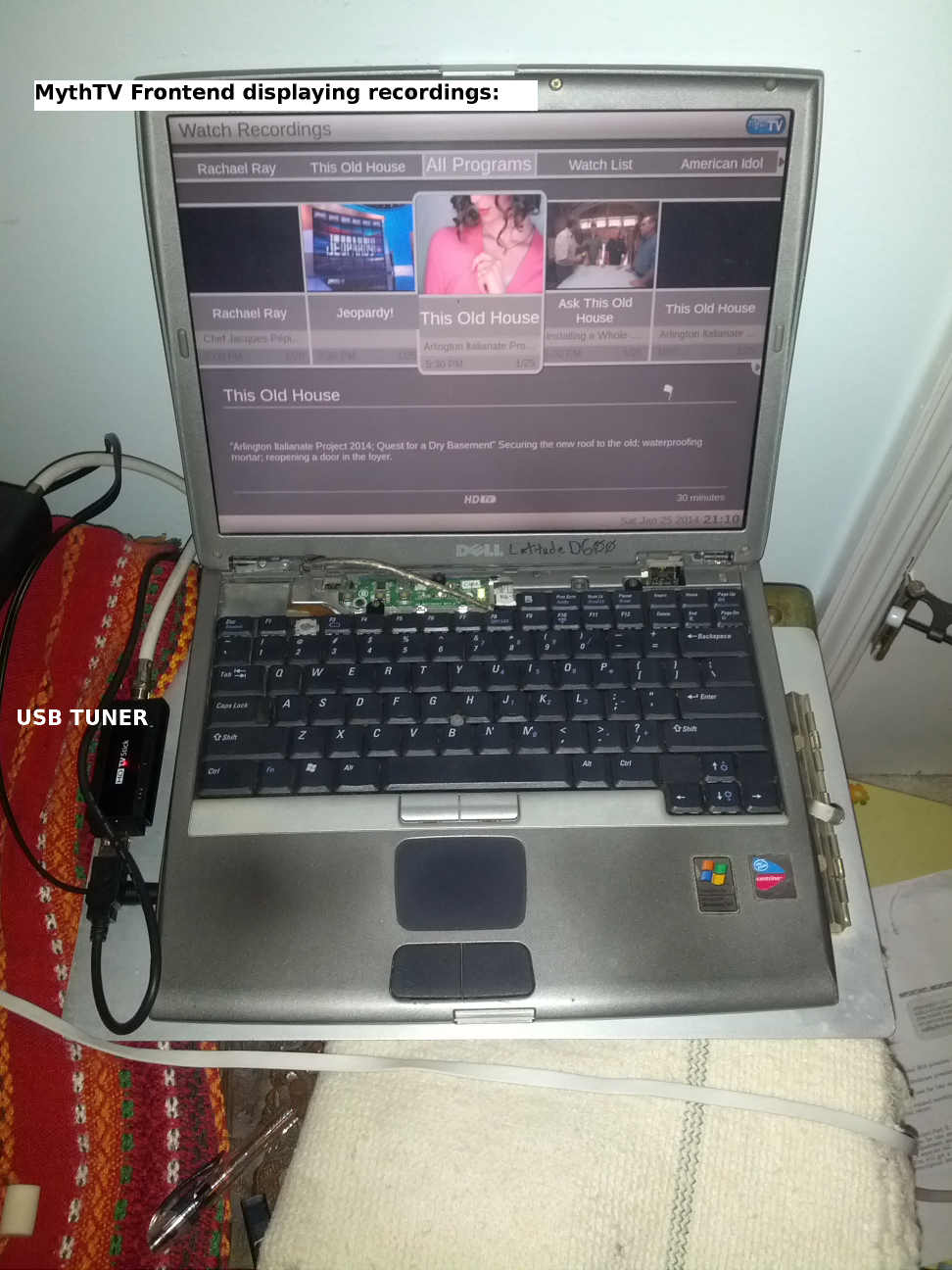 Sidenote: Using an old labtop as a server is great because they are usually low power (esp if you set display to timeout) and have a built-in battery incase power is momentarily disconnected.

I soon discovered that the 60GB disk was being filled up after about a week’s worth of recording (an hour of 1080p TV mpg is about 4gb or so), so I did add an extra 100GB used external usb harddrive which works fine (note 1080p video only really needs a maximum r/w speed of 2MB/sec). The frontend is easy enough for my mom to navigate recordings, although it did take a bit of time to setup the backend properly…see the guides for installing mythtv or for easier setup try a pre-setup linux distro like Mythbuntu which is based on the noobie-friendly Ubuntu.

Again, you don’t need a fast computer to run mythTV: the backend doesn’t need much CPU power as it mainly only needs to copy pre-compressed mpeg data from the Tuner to a disk and just needs to be fast enough to uncompress this mpeg and flag commercials in a reasonable amount of time (which works by looking for tell-tale fade-outs, blanks, and abrupt volume increases in the mpg). The front end can run on a seperate computer connected to the backend via LAN. I even managed to get my $25 Raspberry PI (note: the only way I could get the PI to decompress 1080p mpeg was to utilize the hardware MPEG decoder, requiring me to purchase a $2 license specific for my PI’s serial number, as no amount of overclocking was sufficient). Instead of installing a full linux distro like raspbian on my PI, I am using a much more efficient ~128mb specialized embedded build of XBMC called OpenElec, shown connected to an old CRT tv below: 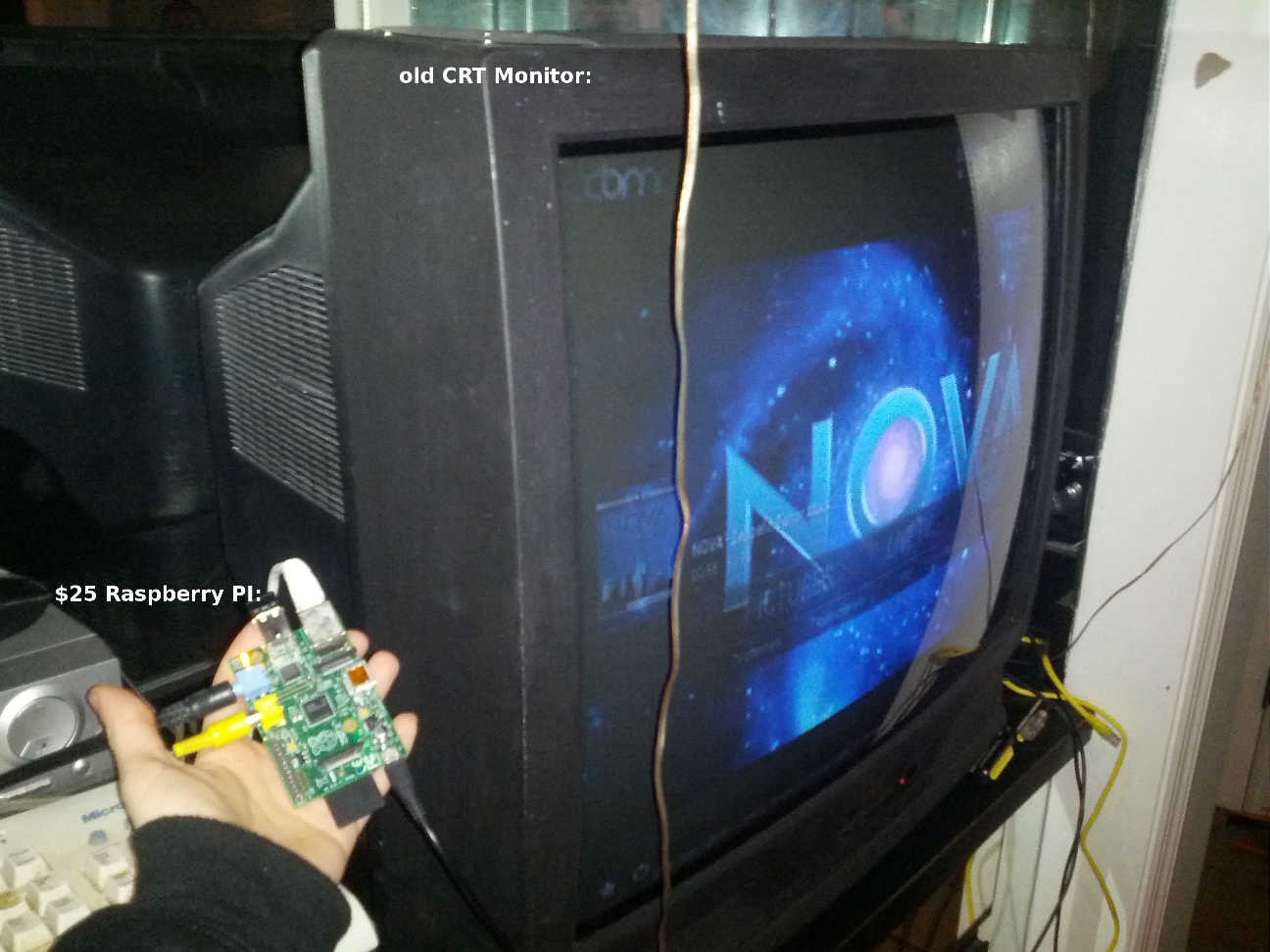 And since the Raspberry PI has HDMI output, it is able to output 1080p video to any HDMI screen, for example to a projector below: 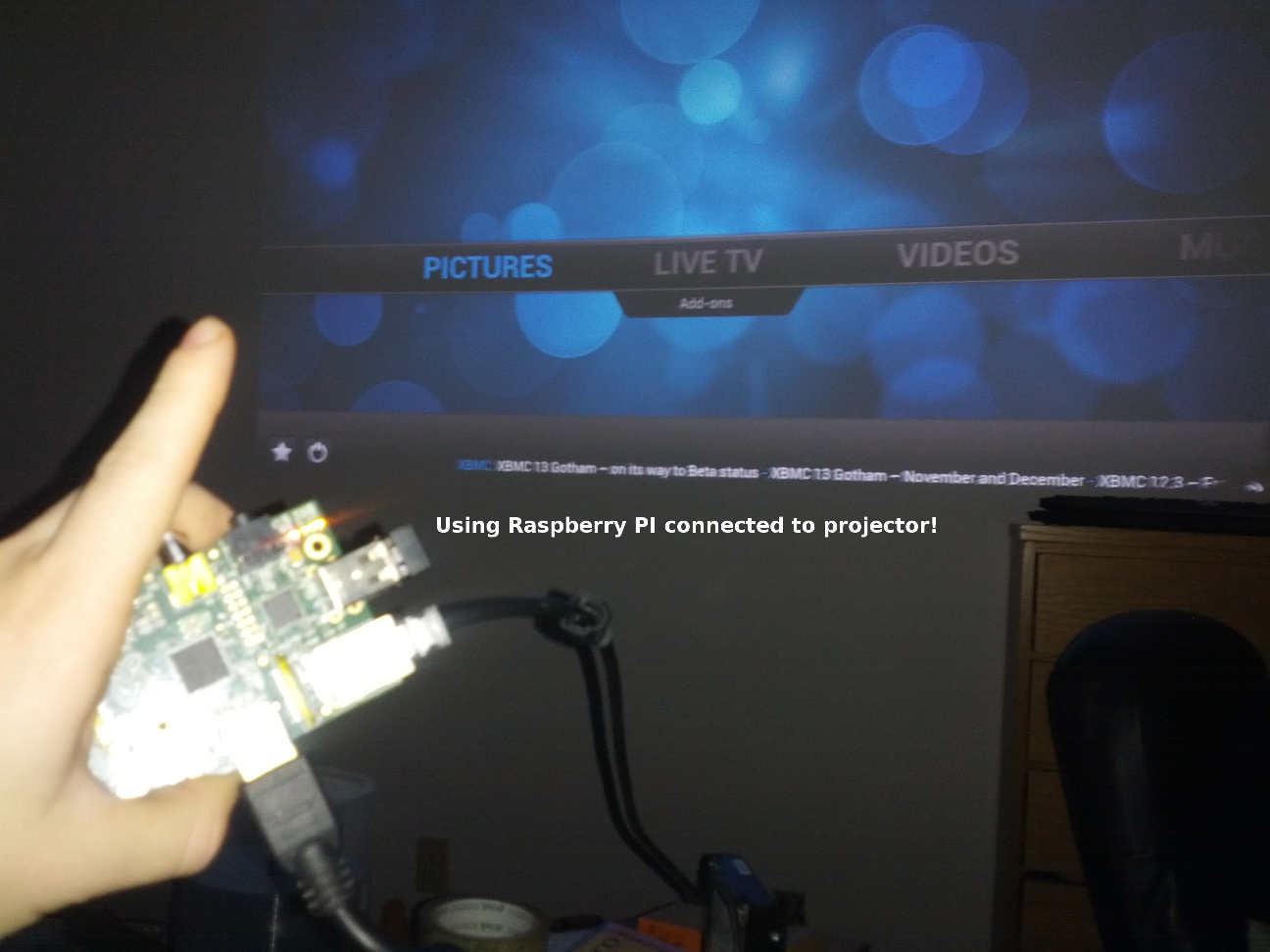 There are many other ways to display the video as they are just MPG (VLC and even Windows Media Player work fine over network) although you won’t get the commercial-removal feature of MythTV. You can even play videos on your android phone with MythTV Android frontend. Also I found some remote controls for xbmc and myth so you can just use your phone to remotely control the frontend (no need to use a wireless keyboard/mouse for controlling from your couch)!

In summary: you can setup your own personal automated TV recording system using MythTV with very little expenses, as the only necessary piece of hardware is a HDTV tuner. The rest of the hardware can be salvaged from an old computer or run as a background processes on your current machine (provided you are willing to leave it powered on all day) and all the software is open source.